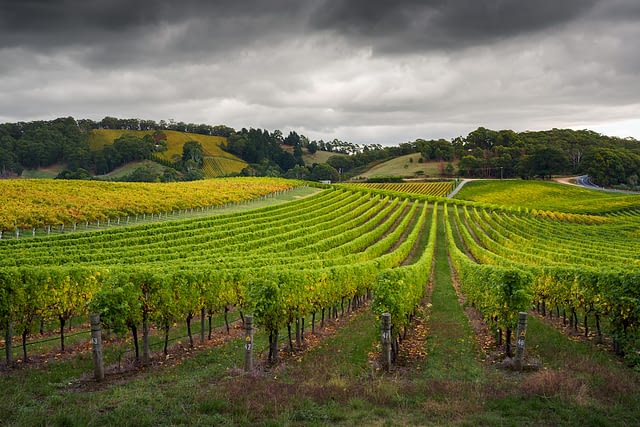 Whilst we’ve got an appreciation for wines from all over the world, it must be said that we’re also proudly Australian and we have a tendency to shout from the rooftops about the amazing wines that our produced on this great land. In honour of our Aussie pastures, we’ll be taking you on a trip through the main wine regions of the Country and what makes them so important to producing some of the best wine in the world.

First up, South Australia. Arguably the region that has really put Australia on the fine wine map in recent years. Whilst Barossa Valley has been flying the flag for SA, and is often the most recognisable wine style from the area, there are also plenty of others to shout about. South Australian vineyards are some of the oldest continuously producing wine in the world, dating back to the 1830’s, with a full breadth of styles produced, thanks to the full breadth of climates in the area.

South Australia is one of the driest states in Australia, although given the size of the region, there are typically a wide variety of climates in different areas. Riverland, for example, is intensely hot, while Adelaide Hills is known for its cool climate, set at an elevation and thus noticeably cooler than most other wine regions in SA. The very popular Barossa Valley sits in between, in a warm to hot environment with modest rainfall. Closer to the coastline, McLaren Vale and Coonawarra have radiant warmth mitigated by ocean breezes.

South Australian vintners produce a multitude of wines, depending on the region. Warmer regions like Barossa are renowned for generous flavour and intense character wines like rich Shiraz. Moderate areas such as Coonawarra produce medium bodied reds like Cabernet Sauvignon, and Adelaide Hills provides the perfect climate for fruity white wines, medium bodied reds and a range of sparkling wines.

Wines to Try in South Australia

Most notably, South Australia holds the accolade for its range of Shiraz and Shiraz blends in varying styles from medium bodied wines in cooler Adelaide Hills, to bold yet smooth varieties in Adelaide Hills. However, in recent history, modern Australian producers have notably exported an acclaimed range of Cabernet Sauvignon, Riesling, Pinot Noir, Chardonnay and Sparkling Wine varieties.

Whilst it’s nigh on impossible to narrow it down to just a few, there a few modern vintners challenging the go with fantastic drops.  Here’s our number one pick from each of the main regions.

Grown in a small vineyard in the Kersbrook region, the Truffle Hound Nebbiolo is delectable easy drinking.

A seriously drinkable yet serious Chardonnay from one of our favourite modern producers.

A spot-on Fiano from one of South Australia’s brightest emerging producers – Jericho.

Our very own Shiraz.  With the 2014 allocation almost exhausted, get in quick.

Perhaps the most beautiful Basket Press ever!

Fancy trying them for yourself?  Head down to Baedeker Thursday to Saturday for a glass or a bottle, or even take one home.